"Maximum damage at long range, if you can keep it steady"
―Description.

The AK-47 is an assault rifle that appears in Scarface: The World Is Yours, it becomes available and is used by several enemies after the Downtown turf is unlocked, but is used much earlier, first during the combat tutorial, and by enemies during the mansion shootout. The weapon can be purchased from an arms dealer for $700, ammo for $150 each clip and can be modified with a double magazine attachment and a Remington 870 Shotgun underbarrel. Tony's Driver carries this rifle, along with a MAC-10. Tony takes one during the final battle in Sosa's mansion, and uses it to kill Sheffield, Gaspar and finally Sosa himself, unloading it on him, finishing the bolivian drug lord once and for all. 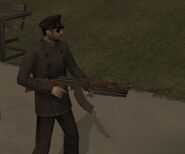 The AK-47 in real life.
Add a photo to this gallery
Retrieved from "https://scarface.fandom.com/wiki/AK-47?oldid=7375"
Community content is available under CC-BY-SA unless otherwise noted.