Elvira Hancock was formerly Frank Lopez's beautiful American girlfriend and later became Tony Montana's wife. Tony nicknames her "Elvie". Elvira was born April 29, 1953 in Baltimore, Maryland. Elvira has German-American heritage. Tony marries Elvira in an expensive wedding, but soon afterwards their married life breaks down, with Tony complaining that all she does is inhale cocaine and quaaludes, and Elvira saying all Tony does is focus on business, remarking that even Frank knew when to give money issues a rest. She eventually leaves Montana after a fight at a restaurant towards the end of the film. She is also mentioned in the video game Scarface - The World is Yours by Sheffield's henchman Pablo to bait Tony into a trap by Sheffield and Sosa. Her exact whereabouts by the end of the film are unknown; she may have descended further into cocaine addiction and died of an overdose. Another possibility is that after leaving Tony she moved on with her life.

"Don't toot your horn, honey. You're not that good."
―Elvira

"Can't you stop saying 'fuck' all the time?"
―Elvira complaing about Tony and Manny swearing all the time 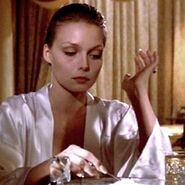 Elvira refusing to dance with Tony.
Add a photo to this gallery

Retrieved from "https://scarface.fandom.com/wiki/Elvira_Hancock?oldid=10211"
Community content is available under CC-BY-SA unless otherwise noted.